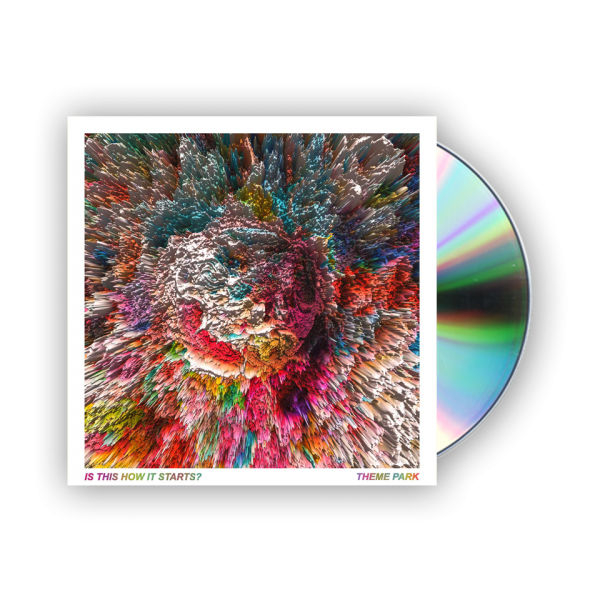 Is This How Its Starts CD Album (Signed)

Coming four years after their self-titled debut album, North London trio Theme Park embrace a new independent spirit, a bold sense of defiance and a fearless pop-fuelled vision with their second album ‘Is This How It Starts?’.

Three years in the making and completed on an ad hoc basis, ‘Is This How It Starts?’ is the result of the band’s collaboration with their old friend Ben Garrett who, under the artist name Fryars, masterminded his own remarkable 2014 album ‘Power’ and has also collaborated with artists such as Lily Allen and Mika.

Fully in control of their destiny, Theme Park’s open-minded approach to the album was to remain true to their vision, to take the bolder option when a safer option presented itself, and to take risks in all of the right places. Lyrically, it focuses on two different yet immediately complementary styles: for some tracks, notably last year’s ‘L.A. (Is Stealing My Friends’), Miles Haughton (vocals/guitar) adopts a direct and abrupt persona based upon his snappy Tweets, while on others he explores ideas more reflective and personal in nature.

Completed by Miles’s twin brother Marcus (bass/guitar/synths) and Oscar Manthorpe (bass/guitar/synths), Theme Park have created a record about growing up, about hitting your mid-20s and seeing the world differently, and about the schism between real and online life. It often pits challenging emotions against uplifting, unashamed pop.

"Without getting too philosophical, you're always looking for stories and meanings in the blank space of life," says Miles. "Lots of the songs are about the start of relationships, the start of things, reading meaning into things, trying to find the stories."

After the scene-setting title track, the album bursts into life with ‘You Are Real’, a song which tops swirling psychedelic pop and tropical, world music-tinged grooves with a chorus that’s both confidently immediate and atmospherically ethereal. That irrepressible sense of elation is also prevalent in ‘Something Good’, a track that prompted DIY to draw comparisons with Jungle and Jai Paul. Whether exploring vibrant disco vibes on ‘Dancing With The Other Girls’ or moodier 80s pop on ‘10AM’, Theme Park exude a bright and buoyant soundscape layered with elastic bass, luminous guitars and rich array of synths.

That summery concoction stands particularly proudly in the album’s new track ‘I’ll Do Anything’ which is available now. "It's about feeling a connection with someone when they've got a boyfriend," says Miles. "It's nice to write a song from the point of view of a villain."